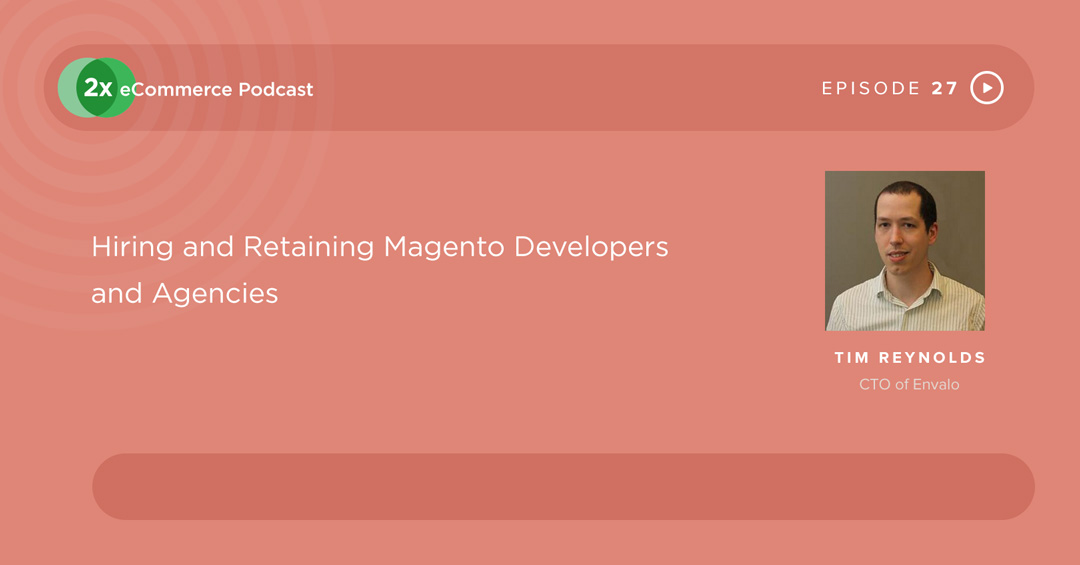 Tim is the a co-founder and Chief Technology Officer (CTO) of Envalo - an eCommerce Consultancy with Magento expertise. He is a Certified Magento Developer, and is a speaker at Magento’s Imagine Conference

We explore the steps to hiring, where to look, and what criteria are involved. Tim draws upon his many years of experience in the Magento agency industry. How to scale out from that first hire, retain and build an in-house development team versus hiring an agency are topics that are also explored in detail in this podcast.

1. Figuring out what you need done so you can qualify your candidates is a good first step:

2. Where to reach out to good candidates to ask if they’re interested in some work:

We have our milestones and we meet them. And as a merchant that’s what you want to make sure you have, to protect yourself.

Sadly, Magento Certification is a good indicator but it cannot be relied on alone

I’d actually recommend some pretty nonstandard techniques and that would be to go on to various Magento developers support sites and see who’s going on there and helping people.

If a module costs money, you’ll need another developer to look over it and fix it @razialx…

If you’re first building a team, you’re going to want to look for someone who is both technology capable and experienced, but also good at working with a team.

If I find the Magento developers don’t have high-end laptops or desktops with solid-state hard drives, that’s the first thing I go to the management about.

We didn’t just listen and say, ‘Oh, you need a site okay well here’s what a site costs’#2XeCommerce

When we go into pitch we don’t send a swanky sales guy with an expensive suit and a terribly expensive haircut. I go, our project manager goes, the person they’re going to be working with. Our CEO goes.